On average civilizations have lasted about 336 years. Most of us are aware that modern civilization has become deeply unsustainable, but many do not realize that we are heading toward civilizational collapse. Today’s civilization is increasingly complex, while social inequalities are deepening, our environmental impact is growing, and the climate is changing. When all four of these indicators rise together, the likelihood of collapse is greater.

The collapse of modern civilization marks a decisive moment in human history. What we face is a turning point between two futures: The Great Transition and the Great Unraveling. The Great Transition describes a future in which society is comprehensively reorganized to sustain itself in dynamic equilibrium with the Earth’s systems. Humans have never before sustainably organized a global society at such a high level of complexity, but for the first time in history it may be possible to live in a globally interconnected, technologically advanced, sustainable civilization – what some call an ecological civilization.

On the other hand, perhaps we lack the collective capacity or will to transform in time to avert collapse. Rather than shepherding the Great Transition, we could experience the Great Unraveling instead. The explosive growth of modern civilization was a historical event predicated on the exploitation of cheap energy reserves buried beneath the Earth’s surface. Now, society’s population and complexity have grown beyond our capacity to sustain them via the continued use of fossil fuels.

Without sustainable alternatives to the global order, the Great Unraveling will become a reality. Current commitments to reduce carbon emissions are estimated to result in a 3-4 degree temperature increase in this century. Experts say that this is incompatible with an organized global community. The ensuing collapse of global systems would be utterly devastating. Some of us would survive, but we would live in a world beset by social breakdown and conflict in which deeply unequal societies competed for resources.

Both these visions are clear and prescient. Both hold a certain truth, and in some ways, the Great Transition and the Great Unraveling are already happening. This world is dying, and the world that replaces it could be both more beautiful and more chaotic. Some people accept the inevitability of collapse and work toward deep adaptation; others accept the possibility of nonlinear social change and work toward deep transformation. But it’s naïve to think that only one of these approaches is correct.

Too often, efforts are divided between those who focus on transforming civilization and those who focus on building resilience. Some people focus on systems change but don’t consider transformation deeply enough, while others adapt to social and ecological breakdown but don’t offer any civilizational alternatives. But what if our efforts to create a more just and caring world weren’t separated from our efforts to adapt to near-term social collapse? What if we accepted the breadth and depth of the transformation required and acknowledged that even if we fail in some measure, we could still transform in ways that serve everyone amidst the chaos?

That is our proposal: to acknowledge both realities and help people to stay in touch with the suffering of the Great Unraveling, while remaining committed to helping all of us carry on – not only to survive, but also to imagine and co-create something better in the form of the Great Transition. How could this be accomplished?

Many if not all of our current social and ecological crises require both an ability to adapt and an ability to create. We need to support ourselves and our communities to respond to collapse with spiritual integrity and a positive vision, and we need an integrated approach that prepares activists, researchers and organizers to maintain hope while probing the depths of suffering – and transforming it. We see this as the heart of spiritual activism, propelled by helping people to reclaim their sense of relationality, develop their capacities for holding complexity, learn how to heal injustice and harm, dream of a better world, and act to bring it about.

Often, responses to collapse are fractured along single issues, narrow theories of change, disciplinary boundaries, national borders, and in some cases identity politics. This fracturing reveals a deeper problem: a crisis of perception about the nature of human beings and our relationship to each other and the world.

Today’s culturally dominant worldview is based on a fundamental dualism and an atomistic view of life that privileges individualism and independence over interdependence. This view of separateness or otherness has affected the ways we relate to each other and to the non-human world. It allows one seemingly arbitrary category to be culturally valued over another: male over female, mind over body, reason over emotion, the universal over the particular, human beings over nature, ‘civilized’ over ‘primitive’. Historically, this has led to the worst forms of injustice, including sexism, racism, colonialism and ecocide. And it has enabled crises of oppression, exploitation, extractivism, and the devaluing of life in general.

Positively addressing the collapse of modern civilization thus calls for a shift away from a worldview based on separation and dualism to an ecological systems view based on interconnections. The systems view provides our current best understanding of nature, but practicing it requires not just intellectual engagement or reflection but fundamentally changing the way we experience and relate to the world. This not only calls for a shift in consciousness, but also a new way of understanding how transformation happens.

The truth is, we need new cultures of practice that integrate personal and social transformation without maintaining a false divide between the inner and outer, as if they represented two totally different spheres. The systems view allows us to become more aware of the non-separation between these spheres, and the necessity to build care-based systems and structures that enhance the quality of our relationships to each other, to non-humans, and to the life cycles of nature.

Rather than addressing the symptoms of our crises, the systems view also calls us to address their underlying causes, and to see patterns in and across different perspectives. Social and ecological crises are interrelated phenomena that share some of the same roots. Addressing our civilizational crisis requires us to see the intersectionality of multiple problems. The refugee crisis, for example, is a problem generated in part by climate change, insofar as drought decreases crop yields, increases unemployment, and exacerbates social instability and conflict leading to large-scale migrations. Solving the refugee crisis can’t therefore happen by building walls, but must instead be addressed through a whole systems approach.

After understanding the deeper causes of suffering there must also be a process of healing to reclaim and restore relationships. Nature exists across a continuum of relationships, such that the way we maltreat each other is reflected in the way we maltreat nonhumans. Once we move beyond denial that climate change is an existential threat, we must consider its root causes and begin to heal them.

In part, this entails healing the trauma caused by exploitative systems like capitalism, white supremacy and patriarchy. It includes demanding reparations for the victims of slavery and colonialism. And it entails building regenerative systems which protect the rights of nature and respect the intrinsic value and sanctity of all life.

As we begin to heal, we can move from a reactive to a responsive stance and consider what else might be possible. What might it look and feel like to embrace an ethos of thriving rather than just surviving? Accepting the magnitude of today’s crises and the likelihood of modern civilization’s collapse offers us fresh new ways to envision a more beautiful world.

What is the most beautifully alive world our caring hearts can envision? Dominant narratives in the mainstream media emphasize adapting to post-apocalyptic realities, as seen in films like Mad Max and Snowpiercer. Alternatively, speculative fiction genres like afrofuturism, indigenous futurism, and solarpunk offer positive visions of sustainable futures based on minoritarian cultural assumptions, values, and traditions.

Of course, these visions are constrained not just by the limits of our imagination but by current realities, possibilities and opportunities for change. Many best practices and solutions exist to create the world we want, but it is difficult to identify the constraints and conditions supporting strategic and effective action. The field of transition design offers integrative ways to align visions with processes for designing sustainable societies. Transition discourses on post-development, eco-socialism, social anarchism, degrowth, the commons, transition towns, and ecovillages describe some ways to design sustainable social systems.

There are many ways for each of us to contribute to the Great Transition. The good news is we are not the first to think this way. Many other teachers, activists, lineages, cultures and traditions have called us back into right relationship with each other and the world. It is our job to put the pieces together and build coalitions that put everyone’s unique skills and capacities to work. None of us have all the answers, but collectively we can support each other’s learning journeys, connect, and build capacity for both the Great Transition and the Great Unraveling. This way we face both realities with our strongest capacities while supporting the best features of the Great Transition.

Zack Walsh and Brooke Lavelle’s new online course on EcoJustice: Securing Our Future is now open for registration. It is a collaboration between the A Mindset for the Anthropocene Project at the IASS, Potsdam and the Courage of Care Coalition. This article was originally published here: https://www.opendemocracy.net/en/transformation/responding-love-civilization-crisis/ 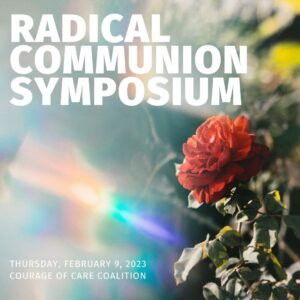